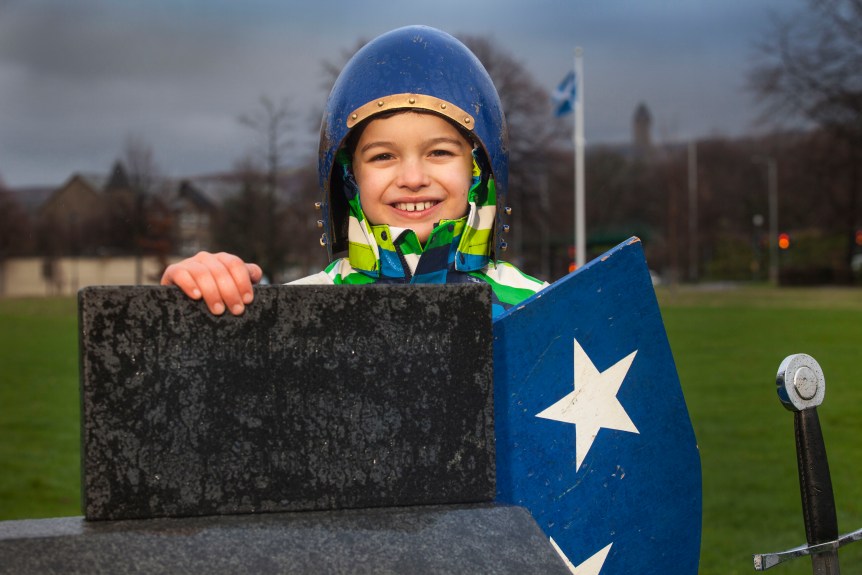 Harris Hesse-Wood is carving out a little piece of history by making his mark at the spot where one of Scotland’s most famous battles took place.

The eight-year-old from Kinlochard in Stirlingshire joined mum, Kirsten, grandparents Fergus and Francesca Wood at Stirling Bridge yesterday (29th Nov), to check out the site where a stone bearing their family’s name will soon be placed for posterity.

The new Stones for Stirling Bridge fundraising scheme is being launched on St Andrews Day by the Guardians of Scotland Trust (GOST), of which Harris’ grandfather is chair.

The family stones, which are roughly A4 size, will cost £450 each and GOST Trustees expect worldwide interest. They will be set within new stone benches that will sit behind new interpretation panels facing Old Stirling Bridge.

Councillor Wood said: “We know from conversations we have already had with members of the worldwide Scottish Diaspora that demand is going to be high for the family stones.

“To have your family’s name set in stone at the place where one of the most important events in Scottish history took place for less than £500 is quite a legacy to leave behind.”

The money raised by the Stones for Stirling Bridge scheme will go towards placing a lasting commemoration to Battle of Stirling Bridge heroes, William Wallace and Andrew de Moray, at the actual site where they stood together after the battle in 1297.

Harris’ stone is the first bearing 120 family names to be placed on two double-sided stone benches by the banks of the River Forth beside Old Stirling Bridge.

An impression of how the benches and stones will look

Find out how you can sign up for a family stone